There are several Easter eggs inside the game.

Within graveside there are multiple graves displaying text, to start with an obvious one, the BokBok memorial. on this memorial are forever engraved the names TheLifeIsYours and ShitKid. The winners of the world championships in which where held in October 2017.

These two graves were designed for the most active QA testers:

Bram (also known as Yram_NL) and Slothinator. These graves also reference their QA history on the grave itself.

Last but not least the tournament staff graves.

These are the graves of the tournament staff. Yagish, Janosch and HeyStijn.

Yagish's grave references the fact that the developer of the game Wase Qazi did not know how to exactly pronounces his name and often got it wrong.

And last but not least HeyStijn's grave, the text on his grave references all the work he had done for the tournament, from writing the rules to motivating Qazi to finish some features needed to make the tournament a success.

This was a log in Riverside that players could crawl into, and bots were unable to kill the player. It was removed in Hotfix 0.9.0.4, where the change log says: "Removed the log from riverside (RIP!)". After this change, people on the official Shotgun Farmers discord server started asking the log to be added back (#justiceforthelog). As a homage, in the the "launch week" update, Oceanside has the log in the distance in the ocean. The log is also present on Graveside, right beside the gromato spawn, although it is a smaller version. Recently, in the 2022 Spring Event, the log was added back into the game in the newest map Forestside. Just like when it was in Riverside, you can crawl in and hide from enemy fire. 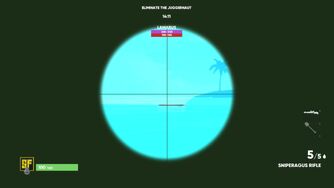 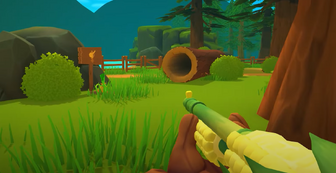 Inside the barn, you can see a radio on a picnic table near the entrance. If you walk up to the radio and press E, the radio will play a song. There is a total of 5 songs, 2 of which are versions of the main menu theme.

The whole Oceanside island is a giant Bokbok head Qazitv showed this off in a tiktok. The bokbok head island is for a old riddle about the fire in the game. (if you turn the image 90° clockwise you can see it better)

Long Live Bok Bok Long Live Bok Bok is an easter egg in the map Graveside that triggers when you get a Chili Thrower and light all the candles in the church in 1 second. Doing this will then summon a

transparent BokBok that will then slowly fly towards the BokBok Memorial and go to rest. When the match is over or when

you return to the lobby you will be rewarded with a Long Live Bok Bok hat unlock. You can only do this in private matches!

One of the many Easter eggs on Forestside is the continuation of the farmer in the outhouse. Earlier in Westside, this farmer, if you hit the stall with your shovel, would plead for toilet paper. Now in Forestside, the farmer has finally achieved his toilet paper. You can even find some inside the tower of the map. He also talks about how it's occupied.

Heading inside the tower on the map, we can see a book sitting on the table titled "Harry Cobber and The Corn Beyond Time." This is a reference to the popular fantasy series "Harry Potter" by J.K. Rowling.